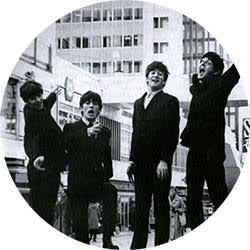 The Beatles were an English rock group that formed in 1960 and have since gone on to sell over 1.6 billion records worldwide, with over 600 million records being sold in the United States, and are considered to be one of the most popular musical groups in history. Its members were John Lennon, Paul McCartney, George Harrison and Ringo Starr.
However, The Beatles once considered themselves failures. On New Year’s Eve in 1961, the group drove in a snowstorm to Decca Recording Studios to lay down 15 tracks based on songs that they were already performing, which was a mashup of R&B and Rock tunes.
Still, it was Dick Rowe, an A&R that was there to hear their sound, who stated that they would never succeed. Specifically, he said that “guitar groups were on their way out.” Five months later, the group received the big break they had been hoping to receive. and signed with George Martin from Parlophone and released their first in a string of hits late that year entitled, Love Me Do.
While others might have gotten discouraged during the rejections and the failures faced by the group, they didn’t falter. They didn’t throw in that proverbial towel. They knew deep down inside that they were bound to be famous and that it was just a matter of time as long as they didn’t give up.