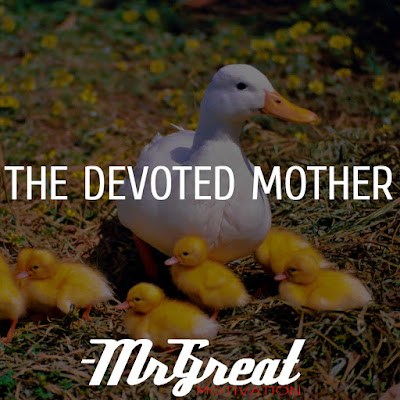 A mother duck and her little ducklings were on their way to the lake one day. The ducklings were very happy following their mother and quack-quacking along the way.
All of a sudden the mother duck saw a fox in the distance.
She was frightened and shouted, “Children, hurry to the lake. There’s a fox!”
The ducklings hurried towards the lake. The mother duck wondered what to do. She began to walk back and forth dragging one wing on the ground.
When the fox saw her he became happy. He said to himself, “It seems that she’s hurt and can’t fly! I can easily catch and eat her!” Then he ran towards her.
The mother duck ran, leading the fox away from the lake. The fox followed her. Now he wouldn’t be able to harm her ducklings. The mother duck looked towards her ducklings and saw that they had reached the lake. She was relieved, so she stopped and took a deep breath.
The fox thought she was tired and he came closer, but the mother duck quickly spread her wings and rose up into the air. She landed in the middle of the lake and her ducklings swam to her.
The fox stared in disbelief at the mother duck and her ducklings. He could not reach them because they were in the middle of the lake.
Some birds drag one of their wings on the ground when an enemy is going to attack. In this way they fool their enemies into thinking they are hurt. When the enemy follows them this gives their children time to escape.
For More Great Motivational Story Click Here