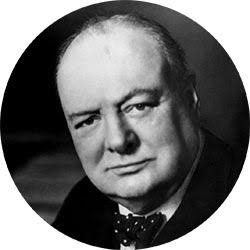 Winston Churchill, Born in 1874, Winston Churchill is famously known as being the Prime Minister of the United Kingdom from October 26th, 1951 through April 6th, 1955, and is  often credited with several very popular quotes about failure such as “Success is not final, failure is not fatal: it is the courage to continue that counts,” and, “Success consists of going from failure to failure without loss of enthusiasm.”
In 1893, Churchill applied to attend the Royal Military College in Sandhurst. He failed that exam 2 times, and on the third try, he succeeded, but only after changing from the infantry division to the cavalry division, which had a lower threshold for entrance. However, he excelled during his tenure there.
During his political career, he lost a total of 5 elections, including his very first one, which included three elections in a row during the years of 1922 through 1924. Throughout his life, he battled clinical depression. He also had a severe lateral lisp and had trouble speaking and making speeches at times, having dentures manufactured to help repair the impediments his speech caused.
However, Churchill was also one of the most successful and renowned politicians to have ever lived.