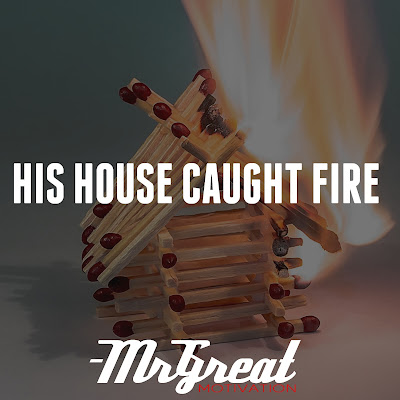 A man who has gone out of his town comes back and finds that his house is on fire.
It was one of the most beautiful houses in the town, and the man loved the house the most! Many were ready to give a double price for the house, but he had never agreed for any price and now it is just burning before his eyes.
And thousands of people have gathered, but nothing can be done, the fire has spread so far that even if you try to put it out, nothing will be saved. So he becomes very sad.
His son comes running and whispers something in his ear:
"Don't be worried. I sold it yesterday and at a very good price ― three times. The offer was so good I could not wait for you. Forgive me."
Father said, "thank God, it's not ours now!" Then the father is relaxed and became a silent watcher, just like 1000s of other watchers.
Please think about it!
Just a moment before he was not a watcher, he was attached.
It is the same house....the same fire.... everything is the same...but now he is not concerned.
In fact, started enjoying it just as everybody else in the crowd.
Then the second son comes running, and he says to the father, "What are you doing? You are smiling ― and the house is on fire?" The father said, "Don't you know, your brother has sold it."
He said, "We have taken only advance amount, not settled fully. I doubt now that the man is going to purchase it now."
Again, everything changes!!
Tears which had disappeared, have come back to the father's eyes, his smile is no more there, his heart is beating fast. The 'watcher' is gone. He is again attached.
And then the third son comes, and he says, "That man is a man of his word. I have just come from him. He said, 'It doesn't matter whether the house is burnt or not, it is mine. And I am going to pay the price that I have settled for. Neither you knew, nor I knew that the house would catch on fire.'"
Again the joy is back and family became 'watchers'! The attachment is no more there.
Actually, nothing is changing!
Just the feeling that "I am the owner! I am not the owner of the house!"
makes the whole difference.
The Moral :
This simple methodology of watching the mind, That you have nothing to do with it.
Everything starts with a Thought!
Most of the thoughts are not yours but from your parents, your teachers, your friends, the books, the movies, the television, the newspapers.
Just count how many thoughts are your own, and you will be surprised that not a single thought is your own. All are from other sources, all are borrowed ― either dumped by others on you, or foolishly dumped by yourself upon yourself, but nothing is yours.
Sow a thought, you reap an action.
Sow an act, you reap a habit.
Sow a habit, you reap a character.
Sow a character, you reap a destiny..!
Reference: http://www.dailytenminutes.com/p/short-stories.html