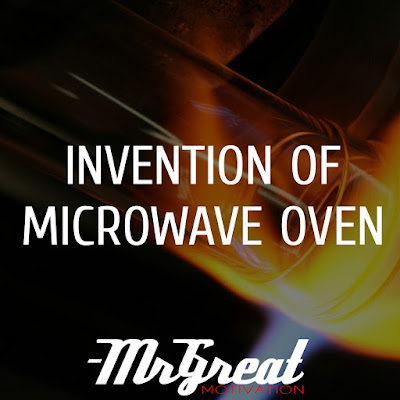 The microwave oven did not come about as a result of someone trying to find a better, faster way to cook. During World War II, Dr. Spencer noticed something very unusual. He was testing a new vacuum tube called a magnetron when he discovered that the candy bar in his pocket had melted.
This intrigued Dr. Spencer, so he tried another experiment. This time he placed some popcorn kernels near the tube and standing a little farther away, he watched the popcorn sputter, crack and pop all over his lab.
The next morning, Dr. Spencer decided to put the magnetron tube near an egg. He was joined by a curious colleague, and they both watched as the egg began to tremor and quake. The curious colleague moved in for a closer look just as the egg exploded and splattered hot yolk all over his amazed face.
The melted candy bar, the popcorn, and now the exploding egg...If an egg can be cooked that quickly, why not other foods? Experimentation began...
Initial reactions were unfavorable. Not surprisingly, many were highly reluctant about these first units, and so they found only limited acceptance.....but not for long.
Further improvements and refinements produced more reliable, lightweight and less expensive Microwave ovens. By 1975 sales of Microwave ovens exceeded that of Gas Ranges in the US.
It is not necessary that someone always has to go the extra mile in search of new ideas. Ideas can "happen" as a by-product of something else. But what you choose to do with them may lead you to change many lives!!!
Reference: http://www.dailytenminutes.com/p/short-stories.html