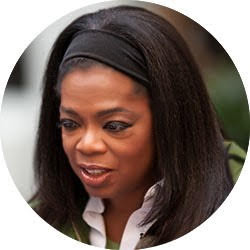 Oprah Winfrey was born in 1954 in Kosciusko, Mississippi to a single teenage mother. Winfrey grew up in a sheer state of utter poverty for most of her childhood life, living with her grandmother during those years. When she was 6-years old, she moved in with her mother in Wisconsin, about the time her mother had another daughter, becoming Winfrey’s half-sister.
During those early years, Winfrey says she was sexually molested by her cousin, her uncle, and a family friend. At the age of 13-years old, she ran away from home. At 14-years old, she was pregnant and gave birth prematurely to a baby that died shortly after birth.
At the age of 17-years old, she won a beauty pageant and interned at a radio station, creating a love for the media, and eventually landing a job after college as a news anchor in Nashville. After college, she moved to Baltimore to co-anchor the news but was later removed by the producer for being unfit for television.
In 1983, at the age of 29-years old, she relocated to Chicago and took over a fledgling show called, AM Chicago, which would ultimately become the Oprah Winfrey Show. She became the highest-ranked talk show in Chicago. Today, she is a multi-billionaire and has had a major impact on a large part of the world.
Oprah was able to overcome multiple failures in her life but didn’t give up. Because of it, she reached international fame and is known around the world as a household name.