-->
Home   Motivational Stories The Tortoise, The Elephant, and The Hippopotamus

The Tortoise, The Elephant, and The Hippopotamus 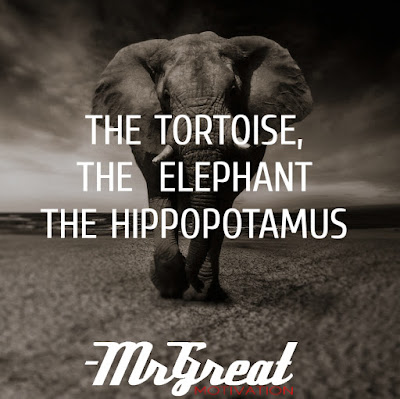 One day the tortoise met the elephant, who trumpeted, “Out of my way, you weakling – I might step on you!”. The tortoise was not afraid and stayed where he was, so the elephant stepped on him, but could not crush him.
“Do not boast Mr. Elephant, I am as strong as you are!” said the tortoise, but the elephant just laughed. So the tortoise asked him to come to his hill the next morning.
The next day, before sunrise, the tortoise ran down the hill to the river where he met the hippopotamus, who was just on his way back to the water after his nocturnal feeding.
“Mr. Hippo! Shall we have a tug-of-war? I bet I’m as strong as you are!” said the tortoise.
The tortoise laughed at this ridiculous idea but agreed. The tortoise produced a long rope and told the hippo to hold it in his mouth until the tortoise shouted “Hey!”.
Then the tortoise ran back up the hill where he found the elephant, who was getting impatient. He gave the elephant the other end of the rope and said, “When I say ‘hey!’ pull, and you’ll see which of us is the strongest.”
Then he ran halfway back down the hill, to a place where he couldn’t be seen and shouted “HEY!”. The elephant and the hippopotamus pulled and pulled, but neither could budge the other – they were of equal strength.
They both agreed that the tortoise was as strong as they were.
Be aware of clever people, they would steal/utilize your powers/efforts by giving you the impression of being a week. Learn to demonstrate your skills and power in the right way by not getting deceived by clever people.
Reference : http://www.dailytenminutes.com/p/short-stories.html