Born in Greenfield Township, Michigan, in 1863, Henry Ford was the industrialist who started Ford Motor Company, which has been one of the most profitable automotive companies in the world over the years, making him into one of the most richest and famous individuals on the planet. However, while Ford celebrated many successes later on in life, he also failed often in his earlier years. 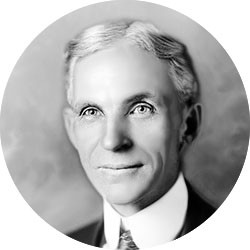 In fact, it wasn’t until 1891, when Ford was 28-years old, that he decided to become an engineer, working for the Edison Illuminating Company and earning a promotion in 1893 at the age of 30, to Chief Engineer. It was around this time when he started experimenting with gasoline engines.

However, it wasn’t until 1898, when Ford was 35-years old, when he designed and built a self-propelled vehicle that he showed off to people, winning the backing of William H. Murphy, who, at the time, was a lumber baron in Detroit. Subsequently, Ford founded the Detroit Automobile Company a year later in 1899.

In 1901, however, that company failed after an inability to pay back a loan to the Dodge brothers and due to inefficiencies in the design of the vehicle; the company ceased operations, dealing a stealthy blow to Ford. However, subsequently, Ford convinced one of this partners to give him another chance. With mounting pressure, it was agreed that he would try again. But after disagreements, this venture also flopped.


It wasn’t until 1903, when Ford would give it one final shot. At the age of 40-years old, after two separate failures, he tried again, incorporating the Ford Motor Company. Even after the failures, Ford found an unconventional backer who he made agree not to meddle in the business. He found this in Malcolmson, a Scottish immigrant who had made his fortune in the coal industry.

Afterwards, what transpired is one of the most famous stories of an individual who went from failure to success in the grandest way. The Ford name is synonymous with the automobile. In fact, while the assembly line existed prior to Ford’s arrival on the scene, so to speak, he created a car that was affordable by the everyday family, helping to develop what was to become the largest boon in the automotive industry with cars everywhere.