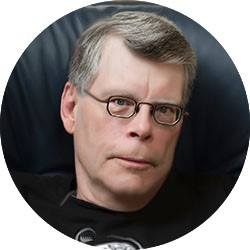 Stephen King Born in 1947, Stephen King is one of the most famous and successful authors of all time. He’s sold over 350 million books but had an unorthodox start to his writing career. In fact, after a subsequent string of failures, Stephen King was all but ready to give up on his hopes and his dreams of becoming a published author.

King was so passionate about writing, that he worked tirelessly to get his worked published. He was rejected so often, however, that by the time he turned 14-years old, a nail supporting his rejection letters on the wall, could no longer bear their weight. Eventually, he replaced the nail with a spike and continued to hang his rejection letters.

After completing his studies at the University of Maine in 1970, at the age of 23-years old, he got himself a teaching certificate, but he was unable to find any work teaching. Instead, he worked for a laundry service while his wife went to work at Dunkin’ Donuts, writing short stories in his spare time.

In 1973, King finally secured a teaching job, however he continued to write when an idea came to his mind. When the idea for his first book, Carrie, a story about a girl with telekinetic powers, first came to him, he had envisioned creating it as a short story for a magazine like, Playboy. But after beginning the story, he realized it was going to need to be longer than the format would call for in Playboy.

One day, after being so frustrated with the story, he crumpled it up and threw it into the garbage, only later to be retrieved by his wife, telling him that he should continue the work and finish it. Upon completion, 30 publishers rejected the book. Eventually, he got published by Doubleday and received a $2,500 advance. A short time after, he was told that he would receive $200,000 for the rights to that book.