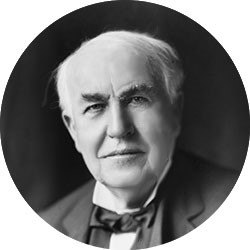 Thomas Edison Famous FailureThomas Edison is an American inventor and entrepreneur born in 1847 in Milan, Ohio, one of seven siblings in a very large family. Edison was home schooled by his mother and developed hearing problems early on in life. He was trained to use the telegraph after a train almost struck the son of a station agent who was so grateful that he taught Edison how to use the system, eventually leading to a job working for Western Union.

In 1877, at the age of 30-years old, Edison invented the phonograph, an invention that was so magical that it made the public dub him with the name “The Wizard of Menlo Park.” In 1878, just a year later, Edison began working on a commercially-viable incandescent lightbulb that would be both long-lasting and highly efficient by not drawing too much energy to operate.
Thomas Edison went through thousands of iterations to make this dream a reality. In fact, he failed over 10,000 times trying to invent a commercially-viable electric bulb. At one point, when asked by a reporter whether he felt like a failure after so many failed attempts. He said, “I have not failed 10,000 times. I have not failed once. I have succeeded in proving that those 10,000 ways will not work. When I have eliminated the ways that will not work, I will find the way that will work.”

Edison had a huge impact on society, holding 1,093 patents to his name at the time of his death. His work in a number of fields created the basis for much of the technologies that we enjoy today and take for granted. However, like anyone else, he suffered through failure numerous time, but where others quit, he persisted.