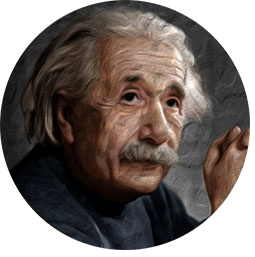 Born in 1879, the man that we all know as one of the most brilliant minds to have ever lived, was once considered a major failure. In fact, Einstein didn’t speak until he was 4-years old. Yes, four-years old. In 1895, at the age of 16, he failed to pass the examination for entrance into the Swiss Federal Polytechnic school located in Zurich.
And while he did graduate from university, he struggled and nearly dropped out, doing very poorly during the course of his studies there. In fact, he was in such dire straits that at the time of his father’s death, he considered his son to be a major failure, which left young Einstein completely heartbroken.
After graduating, he wandered, unsure of what to do with his life. After some time, he ended up taking a job as an insurance salesman, going door to door in an attempt to sell insurance. Eventually, 2 years later, he took a job at the Patent Office as an assistant examiner, evaluating patent applications for a variety of devices.
Of course, this is the same individual who brought us the theory of relativity, with groundbreaking work done in physics and mathematics, and helped us to reach deeper understandings about how the universe works, developing several fundamentals core laws governing physics, won the Nobel Prize in 1921 and created the beginnings of quantum theory.